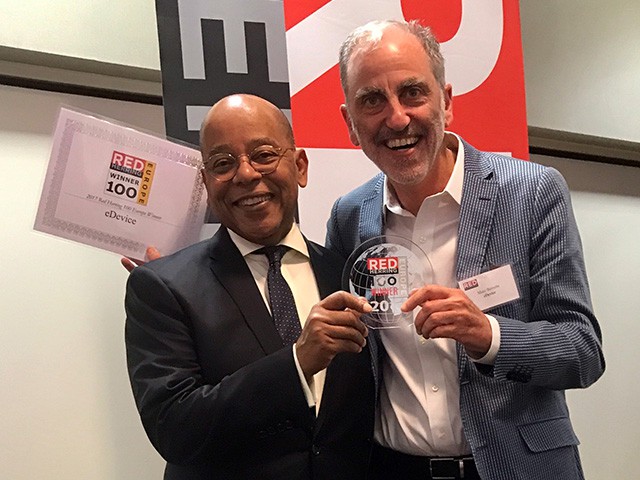 Red Herring announced its European award winners at the Top 100 forum in Amsterdam, recognizing Europe’s leading private companies and celebrating these startups’ innovations and technologies across their respective industries. The American magazine chose eDevice as the leading company in the telehealth field with technologies and services that are shaping the future of the industry.

Red Herring Top 100 Europe enlists outstanding entrepreneurs and promising companies. It selects the award winners from approximately 1,200 privately financed companies each year in the European Region. Since 1996, Red Herring has kept tabs on these up-and-comers. Red Herring’s Top 100 list has become a mark of distinction for identifying promising new companies and entrepreneurs. The magazine’s editors were among the first to recognize that companies such as Alibaba, Facebook, Google, Kakao, Skype, SuperCell, Spotify, Twitter, and YouTube would change the way we live and work. Thousands of the most interesting and innovative companies have graced the Top 100 list over the years.

“In 2017, selecting the top achievers was by no means a small feat,” said Alex Vieux, publisher and CEO of Red Herring. “In fact, we had the toughest time in years because so many entrepreneurs had crossed significant milestones so early in the European tech ecosystem. But after much thought, rigorous contemplation and discussion, we narrowed our list down from hundreds of candidates from across Europe to the Top 100 Winners. We believe eDevice embodies the vision, drive and innovation that define a successful entrepreneurial venture. eDevice should be proud of its accomplishment, as the competition was very strong.”

Red Herring’s editorial staff evaluated the companies on both quantitative and qualitative criteria, such as financial performance, technological innovation, management quality, overall business strategy and market penetration. This assessment was complemented by a review of the track records and standings of similar startups in the same verticals, allowing Red Herring to see past the “hype” and make the list a valuable instrument of discovery and advocacy for the most promising new business models in Europe.

“Being part of the Red Herring Top 100 is quite an achievement for us. We’ve placed innovation at the center of eDevice’s activity since the beginning and we are really proud to be acknowledged as a company that pushes forward the telehealth industry, but also improves the delivery of healthcare services” says Stephane Schinazi, co-founder of eDevice.

We use cookies on our website to give you the most relevant experience by remembering your preferences and repeat visits. By clicking “Accept All”, you consent to the use of ALL the cookies. However, you may visit "Cookie Settings" to provide a controlled consent.
Cookie SettingsAccept All
Manage consent

This website uses cookies to improve your experience while you navigate through the website. Out of these, the cookies that are categorized as necessary are stored on your browser as they are essential for the working of basic functionalities of the website. We also use third-party cookies that help us analyze and understand how you use this website. These cookies will be stored in your browser only with your consent. You also have the option to opt-out of these cookies. But opting out of some of these cookies may affect your browsing experience.
Necessary Always Enabled
Necessary cookies are absolutely essential for the website to function properly. These cookies ensure basic functionalities and security features of the website, anonymously.
Functional
Functional cookies help to perform certain functionalities like sharing the content of the website on social media platforms, collect feedbacks, and other third-party features.
Performance
Performance cookies are used to understand and analyze the key performance indexes of the website which helps in delivering a better user experience for the visitors.
Analytics
Analytical cookies are used to understand how visitors interact with the website. These cookies help provide information on metrics the number of visitors, bounce rate, traffic source, etc.
Advertisement
Advertisement cookies are used to provide visitors with relevant ads and marketing campaigns. These cookies track visitors across websites and collect information to provide customized ads.
Others
Other uncategorized cookies are those that are being analyzed and have not been classified into a category as yet.
SAVE & ACCEPT
Powered by